Anyone worth their gourmet-pink-Himalayan-rock-salt knows that vinyl is the premier way to listen to music. The snap crackle pop, the warm analogue glow – vinyl connects us to our music in a primal way akin to how a campfire connects us to the natural world.

There have been many articles written about the dubious claims surrounding sound quality and vinyl. To me, there is no perceived benefits to vinyl compared to high-quality digital music. (This is constantly being written about. A quick google search gave me some good stuff, like this, this, and this)

So if sound quality isn’t a consideration, and if you are going to insist on buying music rather than streaming it, you will need to choose a physical medium. For me, this comes down to aesthetics. I like the big album art, the weightiness of the records themselves, and the cumbersome, almost ritualistic act of putting on a record that forces you to really pay attention and be involved in what you listen to. But what I like most is the beautiful simplicity of the technology.

The record player operates on the principle that sound is a pressure-wave in the air that will physically vibrate whatever it hits. This vibration is transmitted to a needle, carving little mountain ranges into the “master” record. This record can then be used as a model for large-scale reproduction.

To get the sound out, you reverse the process. This is the familiar picture of a record player – a needle is dragged across the grooves, following the topography. This movement is translated along the arm of the record player to a wire coil in a magnetic field. By moving the coil, an electric signal is created which is then amplified and sent to the speakers.

Schematic of the function of a record player. The right image demonstrates how a stereo stylus works.

What I find incredible about this process is how intricate the topography within the grooves must be such that complicated musical pieces can be contained within it. This means the needle needs to be both sensitive to very small movements of the tip, and also be able to probe very narrow “valleys” in the record. The former is achieved by having a very flexible shaft and a device sensitive to very small fluctuations in the produced electric signal. The latter requires a needle tip that is very thin. A demonstration of this second point is shown below.

Figure from an untraceable textbook, I found this on a forum.

A stylus tip that is larger than the undulations within the groove will not be able to transmit the full information to the speakers. However, a very thin tip will be able to track in the narrowest of grooves.

Perhaps even more impressive, is the robustness of this technique. (This is a story I first heard from 99% Invisible – one of my favorite podcasts.)

In the 1950’s, beneath the brutal censorship of the Iron Curtain, the youth of Soviet Russia were just as obsessed with rock and roll as the rest of the world. However, as if to win a “you think your parents are bad?” contest, consumption of “American” media like rock and roll records was punished severely. Therefore, importing records was a very dangerous proposition and obtaining one was nearly impossible. Yet, this quarantined media still found a way to spread in the form of homemade records.

DIY record cutters were made, and nearly everything was tried as a substitute for vinyl. One of the more successful mediums was used x-ray sheets. You know, those transparent sheets you see on TV when a doctor is showing off a broken bone? The plastic used in these sheets was thin and flimsy, but allowed for reasonable reproduction of a smuggled copy of Johnny B. Good. The resulting records were very low quality, highly illegal, creepy, and ultimately, the most hipster thing imaginable. 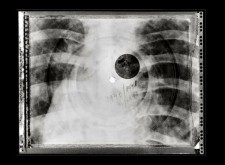 Now, the enterprising hipster may be thinking to themselves, “if this technique is so sensitive to undulations, can we use this to measure the topography of other surfaces?”

With the right tip (perhaps some sort of silicon or silicon nitride, with a radius of curvature about 100x smaller than a record player’s?) and an ultra-flexible cantilever, it would seem possible to measure incredibly small surface features, no?

An animation of an operating AFM. Notice the laser is deflected differently as the tip tracks along the topography of the sample. (Thanks, Carmen Lee)

At its most basic, an AFM is just a ridiculously sensitive record player. A very sharp tip at the end of a flexible cantilever is dragged along the surface of a sample. As the tip rises and falls with the topography of the sample, the cantilever bends to accommodate these elevation changes. Of course there are some differences to accommodate the differences between the two devices. For example, rather than converting the undulations into an electric signal with a coil and magnetic field, the AFM uses what I think is an even more simple and intuitive technique. A laser beam is reflected off the top of the cantilever into a detector. The angle the cantilever makes with the detector changes as it bends, meaning the laser will hit the detector at a different spot. The longer the beam travels, the more it amplifies the size of the undulations. This allows for the measurement of surface features accurate to the sub-nanometer scale. 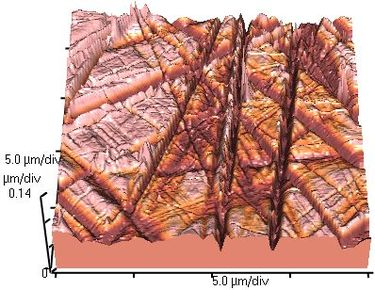 Atomic force microscope topographical scan of a glass surface. The micro and nano-scale features of the glass can be observed, portraying the roughness of the material. The image space is (x,y,z) = (20 µm × 20 µm × 420 nm). (wiki: Chych derivative work: Materialscientist (talk))

Despite being based on very old technology, the AFM wasn’t invented until the late 1980’s. Manufacturing such fine tips is not easy, and keeping errant vibrations out of your measurements is non-trivial. In fact, in a lab I used to work in, very accurate measurements required one to wait until the frequency of buses to the University decreased. The vibration of buses driving past the building was enough to compromise the results.

However, if you are able to compensate for these vibrations, this technique is so accurate and robust that it has become the go-to technique for most surface sciences. An AFM can image the structure of biological molecules and cellular components, individual polymers, and with the proper set-up, individual atoms within a structure (!!!).

So if you chose to observe Record Store Day this year, don’t feel silly for “wasting money on a dead technology”. You can feel proud that you are actually wasting your money on a very crappy AFM.